Welcome to this range of wonderfully captivating children's books!

Amy Brooke, Nelson writer, commentator and critic, originally wrote her magical books for children and young readers as Agnes-Mary Brooke, but is now using a shorter version of her name. Deep Down Things, a selection of her collected poems, has recently been published to critical acclaim.

Amy won two award places for The Mora Stone, nominated by the New Zealand Children's Literature Foundation as one of the top ten Notable Senior Fiction Books of 2001. The Mora Stone was also included on the initial list of nominees for the prestigious international Fantasy Awards for Children's Literature in the US Mythopoeic Awards and was chosen on a Yahoo site as one of the top 5 children’s fantasy books.

LISTEN TO A STORY 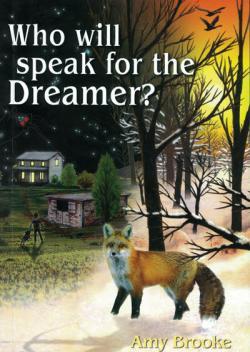 "Who will speak for the Dreamer?" is a fascinating story of parallel worlds and deep magic - for intermediate children and all those who wonder - What if..? Its exciting sequel, Scorpio Rising, is set both in Nelson, New Zealand, and in Kent, in England, where Rowan must go on a deadly errand. There he again finds both Rafe, the fox, his beloved lost dog, Badger, and the children from the house on the hill of a century ago.

The  third and last book in the Dreamer trilogy, The Eye of the Falcon, tells of the price Rafe must pay to save the children, and pits Rowan against the rising Dark, in one very last struggle...But will it be too late?

Amy's first book, A Ring Around the Sun (Random Century) was followed by Night of the Medlar (Ashton Scholastic). Its two sequels, The Last Chance and The Keeper Sleeps, were published by Hazard Press under the umbrella title of The Owl, the Two and the Medlar.

Her subsequent titles, The Mora Stone and The Duck Who went to Heaven, are now all available through The Medlar Press, and were followed by Dragon Moon, Jasper and Granny May, The Little Brass Bell, From Whatever Shadows They Come, The Testing, Who will speak for the Dreamer? The Golden Firepot, Jasper and Granny May Again, The Third Star and Other Stories, Scorpio Rising, The Cat That Nobody Wanted and The Story of the Lonely Silkworm - all currently published by The Medlar Press, and available through the Medlar Press website - www.amybrooke.co.nz

The Mud Fairies, written with the inspiration of three litte girls, is the most recent of Amy published titles to date.

Dragon Moon and The Duck Who Went to Heaven are also now available in Mandarin, published by Shanghai People’s Publishing House, China.

Amy's absorbing and highly original stories for the young disregard the current fads of political correctness, promoted by the children's literary in-groups in New Zealand - but now increasingly questioned because of politicised, or inappropriate, content for young readers.

Her real stories are written for and appeal to children worldwide.  She is a wonderfully imaginative story-teller in the classic tradition, writing the kinds of books young readers pick up to read again - and again - the ultimate test of great children's writing.

She has been called, with good reason, New Zealand's best children's writer, the only one whose stories have been compared to those of  Susan Cooper  (The Dark is Rising)  and C.S. Lewis

And check out reviews for  The Mora Stone, Who will speak for the Dreamer? etc.

Her other titles to date include What Survives is Gold; The 100 Days - Claiming Back New Zealand - and Deep Down Things.

All titles are available through this website on the books page

Currently available in Kindle format at www.amazon.com are all of Amy's  above children's titles.