Books » Intermediate and Young Adults » A Ring Around the Sun

A Ring Around the Sun

A Ring Around the Sun

"Something was afoot, an ancient magic from bygone times, out of place in these last years of the twentieth century.

Twelve-year old Gerry is uneasy. The night of the winter solstice is approaching, and he knows people in the district are planning a huge bonfire. It will beacon forth like the signal fires of long ago, visible along the coast and way out to sea, over the black waters of the night. But he has a feeling that something else is about to happen, something that will challenge him in a way he dreads.

With the finding of a stuffed, mounted pheasant in an antique shop, shortly before the solstice, there begins a chase which has moved through the centuries, from the Greece of Jason and the Argonauts, to seek its final resolution on this night of the solstice. Before he can understand what is happening, Gerry, his brother Ben and their friend, Mara, are caught up in a contest of opposing forces from other times, and from other worlds.

"... reminiscent of Susan Cooper's "The Dark is Rising" with a conflict between good and evil climaxing on mid-winter's day.. The opening and closing chapters are full of nail-biting tensions..." Betty Gilderdale. New Zealand Herald.

"The skilful blend of Greek legend and local events and people propels the story along. The author has created believable characters in an intriguing story." Bruce Morris. The Dominion.

A Ring Around the Sun, for intermediate readers, set in Nelson, New Zealand, and first published in 1992 by Random Century NZ Ltd, has now been republished by The Medlar Press. Cover illustration, Dean Raybould. 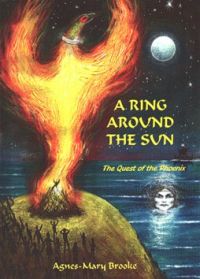