Virgo In Proelium Provehetur - A Maid Will Ride Forth Into Battle -

On her thirteenth birthday, Willow is given a broken ring in a curious box with a cryptic message. From the moment she slips the ring onto her finger, nothing is quite the same. Summoned back hundreds of years to a Scandinavian country visited in her dreams she becomes embroiled in an epic quest to defend the rightful heir to the throne, the young queen-elect Amise, little older than herself. It will be for the ancient Mora Stone to decide the outcome of a struggle against the abuse of power - and for life itself.

" A good solid fantasy for readers who like something they can get their teeth into... I enjoyed this book - it is well-written, very carefully researched, and deserves a place on any senior shelf." JN..Well.Read.

"I really loved The Mora Stone .I count it is one of my favourite books. Trust me; this is saying something. I'm 30+ and I still love it. I saw on the children'sbookreview something about a sequel. Is this right? Is there a sequel to The Mora Stone. If not, will there be? Thank you. Nicola T. (A 2018 query.)

"I really liked it. Great story! My sort of book! Keep writing; happy to review any future books!"Thomas King...10 years.

"I read it in three days and it was great." Anna.Powell. 8 years.

" I loved this!!This book is amazing and cetainly deserves more good reviews! It's an intricate tale twisted with intrigue and fantasy and now I cannot get enough of this author! Her writing is wonderful and witty, the friendships are strong and the romances very well done. It rates as my favourite book right now and I cannot wait to buy more. I will not spoil the plot by going into detail but I'll just say that yes -  readers mostly have very different opinions on books...but I believe that most people would probably agree with me on this one. It is so superbly written. Please try it out, I recommend it highly!" Bookworm

"Such a magical adventure story that I could read over again!  I will be passing it on to my godchildren. Dr Eileen  Smith

The Mora Stone, first published by The Medlar Press, cover illustration by Dean Raybould, was  included in the Children's Literature Foundation of New Zealand Inc. nominations for the top ten Notable Senior Fiction in its year.

It was listed on a Yahoo site as one of her top five all-time historical fantasies by another reviewer. 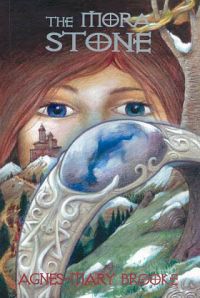