"The difference between some great ideas and shaping a great blueprint for change is the ability to integrate critical insights into a coherent message... easily understood and implemented. Amy displays a rare talent for communicating the single most important issue confronting us – the potential to resurrect our moribund democracy. The pages sizzle with brave commentary on what’s gone wrong, why they’ve gone wrong and more importantly, how we can best shift to constrain the voracious hegemony of the government so that it truly serves the people that pay for it rather than the other way around. An inspired road-map of where we need to go."
- Marc Alexander, Author & former MP

"There is perhaps less of a gap between the élite and popular opinion in Switzerland than in any other country…
The Swiss President is drawn from the Federal Council and the presidency rotates. Every councillor will serve {as president} in their term. One cannot advance or extend one’s term through charisma…
It feels as though the Swiss national government has forgotten or repressed a tribalism that seems endemic in most countries’ representative systems… Swiss politicians generally regard themselves as servants of the people."
- Greig Fleming, a Vice President and Senior Analyst Credit Suisse

"As an observer, blog commentator and one-time participant in the New Zealand political process all my adult life I have been most struck by Amy’s 100 Days campaign. Her proposal for the 100 Day stand down on all legislation…replicates many of the good aspects of the Swiss referendum system without imposing a major upheaval on our current MMP electoral system. The power granted to voters under the 100 Days proposal is so sweeping that in my opinion, this proposal is the most significant proposed change to New Zealand’s electoral laws since the abolition of the Legislative Council in 1951 and the introduction of MMP in 1996.
Simple and easy to implement, one of its beauties is that it is nonpolitical. The problems of poor lawmaking and foisting ideologically unpopular legislation on a reluctant public afflict both sides of the political divide.
The greatest opposition will come from current politicians who are happy with the status quo that sees them only accountable for their actions at the triennial General Elections."
- Jeff McIntyre, Investment Vice President, BC Gas Recovery, Arizona

Availiable from from Whitcoulls, Paper Plus, Take Note, The Warehouse- or any good bookshop. 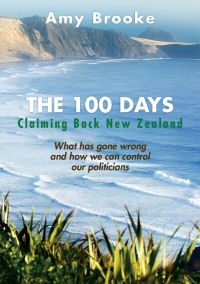