Books » Non-Fiction » What Survives Is Gold

What Survives Is Gold

What Survives Is Gold is a unique story of life on the Pa at Rangiahua from the point of view of a small boy who grew up in the 1930s in Hawke's Bay, near Wairoa.

Living in the school-house attached to what was then called the Native School, where tuberculosis took its toll in those years, and where he and his sister were the only European children, its author tells a fascinating story of an important, pre-world War 11 account of our history, and of incidents little known today.

It is also the story of his parents, in sole charge of the school first at Reporua, on the East Coast, and then at Rangiahua, and of their love of the Maori children of the Pa.

What Survives Is Gold also provides a useful corrective to misinformation too often repeated – and an undermining of the reality of the very real bond between New Zealanders of goodwill - those of both Maori and of colonial descent. 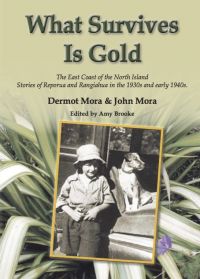