Books » Intermediate and Young Adults » From Whatever Shadows They Come

From Whatever Shadows They Come

"Myth, legend and science fiction are melded together spanning centuries and planets in an imaginative, sweeping story...An interesting and challenging read."

"From here it is said that once more he can look to the shores of this land and beyond where armies still fight, and will - until these times are gone. Those who have seen him say that if all is well, and if the land will withstand the forces which threaten it, from whatever shadows they come, the king will stand high in his stirrups and drink from the silver goblet to the King of Kings, Lord of Complexity and Chaos. But for him to drink to his liege lord, the cup must be there in time, with its bearer. And herein lies these stories."

From the House of Elix, three brothers of the royal blood have spent centuries in a search involving a lost silver goblet, a cup crafted long ago, which somehow holds the key to their past and their future.

As guardians to the planet Earth, their heraldic colours grant each of them powers whose limits they do not know. Yet there are others from ages past in time and space who know of their search, and have both their own powers, and their own designs. With the disappearance of the King and Queen, some seek balance, some seek power, but the wrath of a Prince can be deadly.

From the planet Complexity, through the Dark Passages, to ancient and modern-day Earth, the quest maps new worlds and old, as the princes Dragos, Gerwin and Meer seek the goblet, before the ghost of the High King rides out once more.

"...A wonderful read ...exciting and intellectually stimulating.... It's true a good children's book can be read with pleasure by a reader of any age..." Ann Macrae. 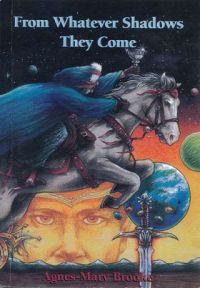