"Rowan, O Rowan, our time is now here. Will you now come? We know that you hear!"

In this stand-alone sequel to Who will speak for the Dreamer? Rowan finds himself in mortal danger from the spreading dark, which has taken on a new and deadly form. A trap has been laid for the Dreamer, and the bait is Badger, his beloved English bull terrier who previously saved Rowan's life, but has now vanished. In his search for him, it is the red-gold fox who again brings Rowan to the children through the passages of space and time, their fate inextricably entwined, while overhead, Scorpio rises...

"A highly imaginative and moving story from an outstanding children's writer, intriguing and engrossing, with an edge of menace."  E.S.

Scorpio Rising,  the second book in the trilogy  beginning Who will speak for the Dreamer? has been followed by The Eye of the Falcon, described  by one English reviewer as "quite simply outstanding." C.N

"Fantastic! Thank you!! Scorpio Rising, with Who will speak for the Dreamer? deserve highest honours in literature for young New Zealanders. I was swept away with the colossal momentum of your story encompassing myths and science I have no favourite bits. 10/10 and five stars!"  Pam Nevil.

Although this trilogy, concluding with the third book in the series The Eye of the Falcon,  was written primarily for the 11 to 12 year old age-group upwards, it recently received a glowing tribute from a 10 year old reader, who also read The Mora Stone four times - because - as she said - she loved it so much...Amy. 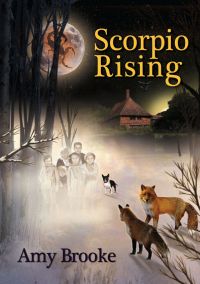